Rockey, a German Shepherd, resided in the United States with his owners. He was a wonderful two-year-old dog who was exceptionally kind to his animal pals. Miya, her owner’s new dog, had lately been adopted. 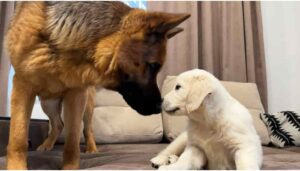 Rockey had always been intrigued by Miya whenever he had seen her before. Their mother had made tremendous pains to familiarize the dog with the enormous canine. When Rockey first saw the puppy, he sprang onto the sofa and sniffed it all over. 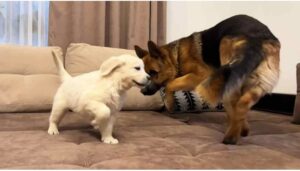 He seemed thrilled to have made a new friend. He needed to learn everything he could about the small dog. He continued to sniff Miya in this fashion. The small dog raced to his mother and requested that she deliver her to him. 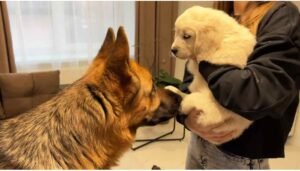 Rockey couldn’t stop smelling, though. The small white puppy captivated him. Rockey’s behavior was readily accepted by the dog. Miya approached him and paused for a few minutes. 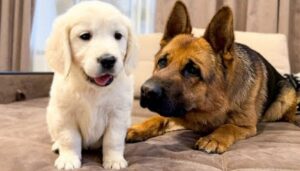 Rockey kept an eye on the little dog, and the two became fast friends. Miya was having a nice time and used her front paws to play with Rockey. Miya was allowed to play because Rockey was persistent and sympathetic to her.